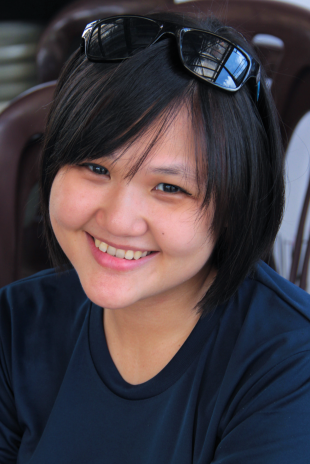 Bengkel Animasi (Bgkl): Hi Maylee! Thanks for having the time to chat with us. Can you tell us a bit more about yourself?

Maylee (M): Hi all, I’m happy to share my story with everyone and Bengkel Animasi. I am Seraphina Meiliana, but please call me Maylee. I was born and raised in Jakarta, Indonesia, and I am currently working at Giggle Garage – Malaysia as Animation Supervisor.

My first professional career started in 2006 when I became an animator at Castle Animation Jakarta. In the year 2009 I joined Infinite Frameworks Studios Batam, and within the same year, another opportunity called, where I moved to One Animation Singapore and worked there for almost 5 years, before I finally joined Giggle Garage in Malaysia.

Bgkl: Wow, that’s quite impressive with winning the awards! But let’s reset to the very beginning, how did you get to know Animation? And what made you decide to be an Animator?

M: It didn’t really take much effort for me to fall in love with animation. I’ve always love playing games, watching movies, and also, I used to play with barbies when I was a kid! Really! I see some similarities when doing my animation just like when I was playing with them. I put emotions and stories into them, I acted the performance out, and putting it into them to make them feel alive.

Bgkl: How was your process in learning animation?

M: Learning animation is an ongoing process cycles, and there is always gonna be ups and downs in it. The first time you get into learning Animation, you’d discover that there are so many things to learn about. So you have to learn and practice over and over, until it became a part of your life, your lifestyle. After few years, people will start to look up to you, asking you for some advice, tips/tricks, etc. And all of this made you think that you know a lot about animation. Until the time that you see other people’s great work, your colleague’s excellent work. And then you start to think again, maybe I know nothing about animation. You then started to feel like you’re not a good animator, you felt like you’re skills are being left behind, etc. That is actually the interesting part. It’s painful to see how other people improve, but it can motivates you to back on learning and challenging yourself to the next level. However, what really matters is not the final result, but the process itself which makes us stronger, and better as a person, as an artist.

Bgkl: How was the animation industry like when you first started your career?

M: When I first started my career, 3D Animated TV series weren’t as famous as TV commercials. People didn’t really know about the industry. Most of production houses in Jakarta/Indonesia were working on TV commercials, so being a 3D Animator was not as preferred as 3D Generalist back then.

I considered myself lucky because I got my first job just after I graduated from school.

“Never compare yourself with other people because everyone has different journey.

Compare yourself with your past.”

Bgkl: Can you elaborate more on your career journey?

M: I started as a Junior Animator.

From a Junior animator to become an Animator, my focus was just to improve my skill in every shot that I’ve been assigned to. I have to understand what my lead wants, and what the supervisor and the director wants.

After few years, I got bored of animation. I felt stuck and thought that I couldn’t improve my skill further. It became to be just a job to me, where I would just go to the office and do my job and repeat it everyday in a week. I think that was my down-moment, and I thought that I need to do something about it. So to boost my passion back, I decided to study animation again, that is the time when I took online animation course. It was a great experience to get to know new artists with good talents. So I unlearned few of the skills that I knew and started to learn new ones. I’ve found a new passion in animation again and I felt alive.

Supervising is quite interesting because apart from animation skills, I have to understand about people’s personalities. How to teach the animators how to achieve certain qualities, how to be problem solving. I’ve learned not to just focus on one shot but to see it in a bigger picture. I am still learning that process right now, and quite enjoying it.

Bgkl: How did you manage to start working overseas? What do you think is needed to compete in an international industry?

M: The main important thing is connection/network. When I was working at Infinite Frameworks Studios, I had the chance to get to know a lot of people, seniors and juniors, from artists to directors. I maintain a good relationship with those people eventho’ we’re no longer working in the same company anymore. And second is to show your performance. I love animating, and I take my job seriously. I showed it through my working performance.

I don’t think you need to compete with anyone but yourself. You can get inspiration from the people all around the world, and you can always learn from them. But you will always need to compete with yourself, in order to strive more and become a better artist. It also helps you to stay humble, open minded and being dedicated to your job.

Bgkl: What are your responsibilities as animation supervisor? And how is your daily life like?

M: My daily job is mostly to check the quality of the shots, train and nurture the animation team, and also to make sure that the animation quality is of the standard that the project needs. I communicate with the clients or animation director about the notes and about the episodes.

From layout to animation, I have to make sure that the layout files are ready for animators, I put in all the notes from clients and brief all of the animators before we are starting on an episode. I run dailies, where we discuss and review the animators’ works.

Aside from animation team, I also have to brief the post production team about the episode. Mostly to let them know about which part needs FX, or any specific notes for lighting.

Bgkl: As an animation supervisor, you must have involved in hiring the crews too. What are the qualities that you are looking for in recruiting animators? Can you tell us 3 main factors that you seek in a potential crew?

M: Attitude, this is the most important part that we would want to see in an artist. A humble and open-minded artist is easier to work with. We have more appreciation to the people who can do the work rather than just saying it.

Passion, this is the power who drives an artist to grow stronger and better.

Open-mindedness, mostly people who are open for new challenges and different ways of working. There is always room to improve for them.

Bgkl: Do you have many Indonesian animator applicants? How are they compared to applicants from other surrounding countries?

M: Yes, a lot. Indonesian applicants mostly avoid speaking in English. Some don’t have enough confidence in answering the questions, and they tend to be quiet and less proactive compared with other applicants from other countries. I personally advice Indonesian talents to practice speaking in English before applying to any international company. That said, however, Indonesian artists are one of the most talented and hard working artists that I’ve seen. Our current studio is very happy with most of the Indonesian artists that work here.

Bgkl: What do you do in spare time that helps you grow as an artist and animator?

M: I spend my time watching movies, or playing games. I like to interact with people and read their body languages, pay attention to people’s behaviour. And sometimes I spend my free time by drawing.

Bgkl: How do you see our local animation education & industry?

M: Honestly speaking, I see Indonesia has a big potential to grow in this industry. It’s growing quite fast, a lot of entrepreneurs and start-up companies starting to come out in Indonesia. On top of that, we now have more and more schools and short courses for those who are interested in this industry. And compared with the past 5 years, artists are now more respected and appreciated in our country.

Bgkl: Any tip for the young souls out there? Maybe who’s still learning, or just started their journey in the industry.

Y:For those who are still learning, don’t be easily give up, always take problem as a challenge, and always remembers: what matters most is not the final result, but the process itself. Never compare yourself with other people because everyone has different journey. Compare yourself with your past. There is a saying, “It doesn’t matter how slowly you go, as long as you don’t stop”.

“Rob the Robot” as Animator